History of the DockFrom NextStep to macOS

In 1988, NeXT, Inc. released NextStep 0.8, which contained the first iteration of the dock. This is how Steve Jobs introduced the dock to the world:

“The dock — It turns out that, when you’re running applications, things can get lost. These icons can get hidden and you might want to read your mail at a moment’s notice. So we allow you to take any icon and take it over to any one of these dock positions and it’ll snap in and dock. And the minute it docks, nothing can go in front of it. And so it’s a place to always have the applications that you use handy. You can customize it any way you want to, and nothing will ever keep these things from being a glance away. That’s what the dock’s all about. And if you decide that you need to use that right part of the screen for an awfully big window, and you don’t want to undock things, you can just slide it down and everything, but the little logo will go off the screen.”
Steve Jobs, San Francisco’s Davies Symphony Hall, October 12th, 1988 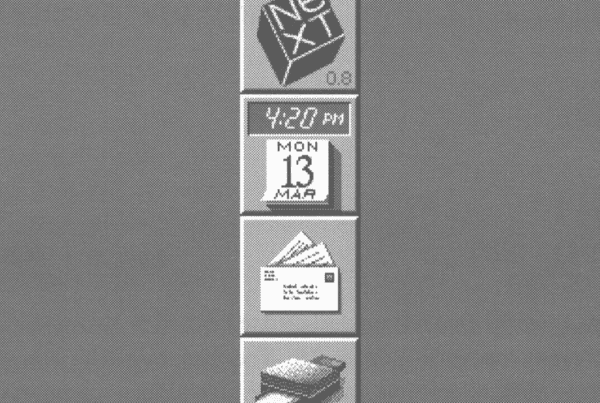 Steve Jobs first demonstrated the Aqua interface on January 5th, 2000 at the MacWorld 2000 conference. Jobs demoed minimizing and maximizing window animations for the first time. This was the first re-emergence of the NeXTStep Dock in a Mac OS X build, which was released as Mac OS X Developer Preview 3.

At the Apple Expo 2000, Steve Jobs presented the Mac OS X Public Beta along with a more refined Dock the during September 13th Keynote. The crowd was impressed by the magnification feature, which was arguably more a demo of the new Aqua interface’s fluid graphics than anything else.

The Dock replacement for the Mac for just $30. Buy Now